The rod-style air cylinder（click for more information about the cylinder)  consists of a cylinder barrel , piston, piston rod, both end caps, friction wearing, O-ring. It uses the pressure of compressed air to perform work, specially linear work. A port at one end of the cylinder supplies compressed air to one side of the piston, causing it and the piston rod to move. The air on the opposite side of the piston escape.

Double-acting cylinders use compressed air to power both the extend and retract strokes, moving the rod back and forth. This arrangement makes them ideal for pushing and pulling loads. Controlling the rate at which air exhausts determines rod speed.

Throttle valve will control the speed of air cylinder, such as JSC series.

Solenoid directional valve will control air direction, such as 4V210-08.

Meanwhile, you need to connect the whole pneumatic system by air hoses and some pneumatic push in fittings.

Single-acting cylinders have compressed air supplied to only one side of the piston; the other side exhausts to atmosphere. Depending on whether air is routed to the cap or rod end determines whether the rod extends or retracts. The most common type is pressure-extended, with an internal spring returning the piston to its original position when air exhausts. In other designs, gravity or an external spring powers the return stroke.

Rod-style cylinders are easy to be disassembled to replace seals and other internal components. You can buy some cylinder kits to replace them to lengthen cylinder life. 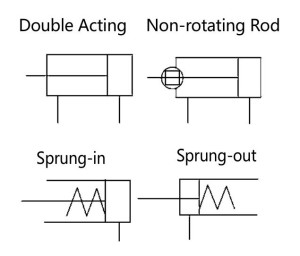